Ah, Norseman. Beautiful one day, it's just that no-one can remember when. The few shops still open have their windows covered in corrugated iron, and the whole main street just looks desolate. It's not that nobody's trying, but they appear to be flogging a dead camel. Speaking of camels, a more picturesque use of the ubiquitous corrugated iron is the tin camel installation in the middle of the roundabout on the main drag:

Other than that, there is really nothing to report from Norseman.
Next day it was Eastward Ho and full steam ahead for the Nullarbor Plain, or at least what we thought was supposed to be the "Treeless Plain".
Given that there was only a stretch of about twenty k's without anything you would normally refer to as a tree, I think we need a referendum to change the name to "Multis Arboribus Plain", with the emphasis on the bori(ng) part. What a Tourism WA/SA/Australia con it is.
Just one boring long straight after another, with the previously mentioned longest straight in Australia of 90 miles (145.6km) between Balladonia and Caiguna just rivetingly full of suspense - when will it ever end?????? 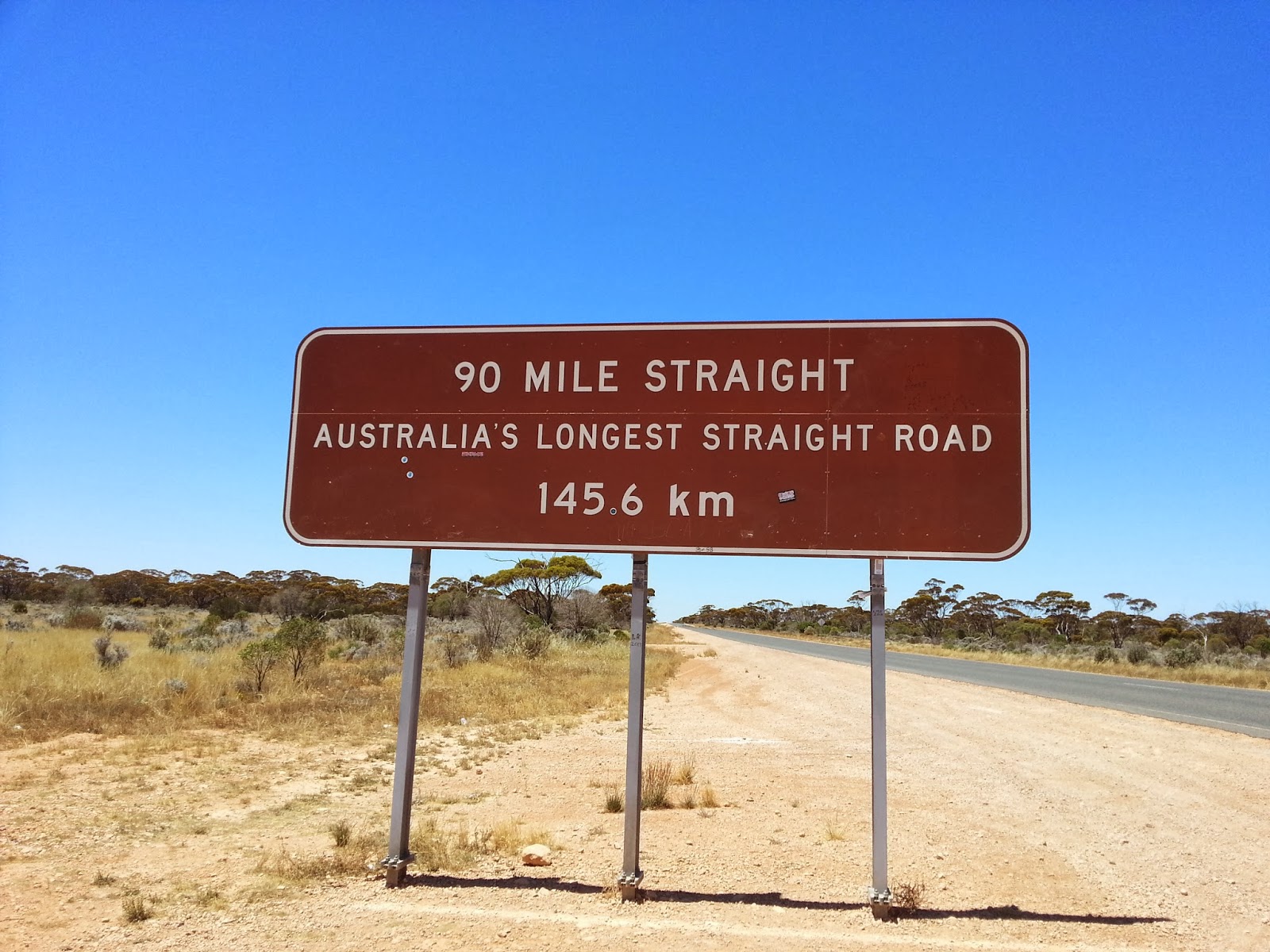 We planned to overnight at Caiguna, which likes to paint itself as the "Hub of the Universe" (they are either seriously up themselves, or are having a gigantic lend of all travelers), but since there was absolutely nothing there to entice us to stop (a recurring theme out here...) we pushed on to just before Cocklebiddy (got to love some of the names at least) and free-camped in a rest area on the side of the highway. There was one other bloke camped there with his dog, Hilux and van who had been there for a couple of days. The question "Why?" sprang instantly to mind, but we didn't really want to know. Ran into him again later on in Ceduna where he said he had come into town for his weekly shower :(= 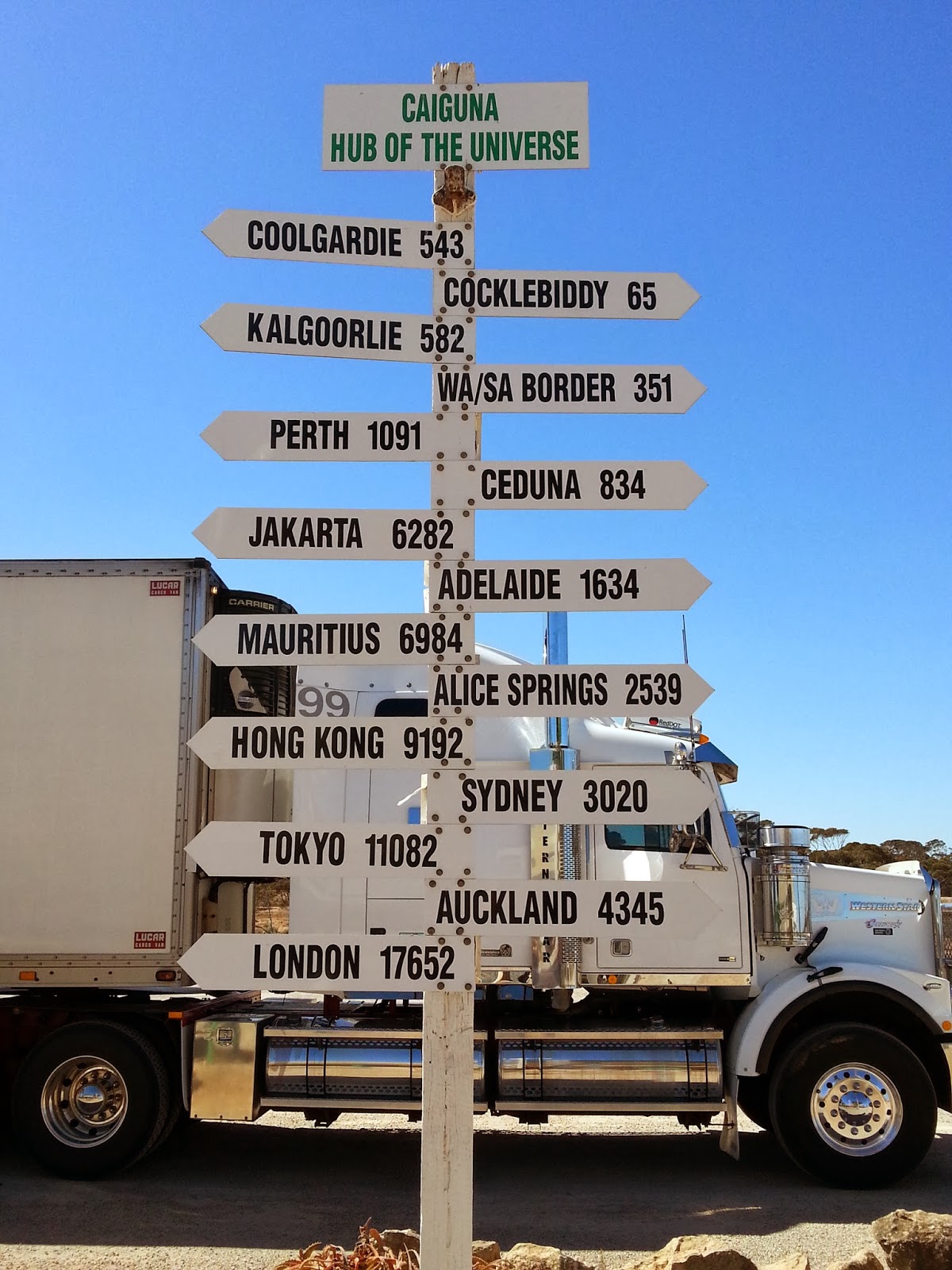 Bidding a fond (?) farewell (well we were glad to be leaving anyway) to Cocklebiddy, we set out towards South Australia. There were actually a few interesting bits on this leg. The highway drops off the tablelands and down to the coast at Mandura, and the views from the top are quietly awesome. The photos don't really do it justice as we are still relying on the mobile for picture snapping - got to get that replacement camera! 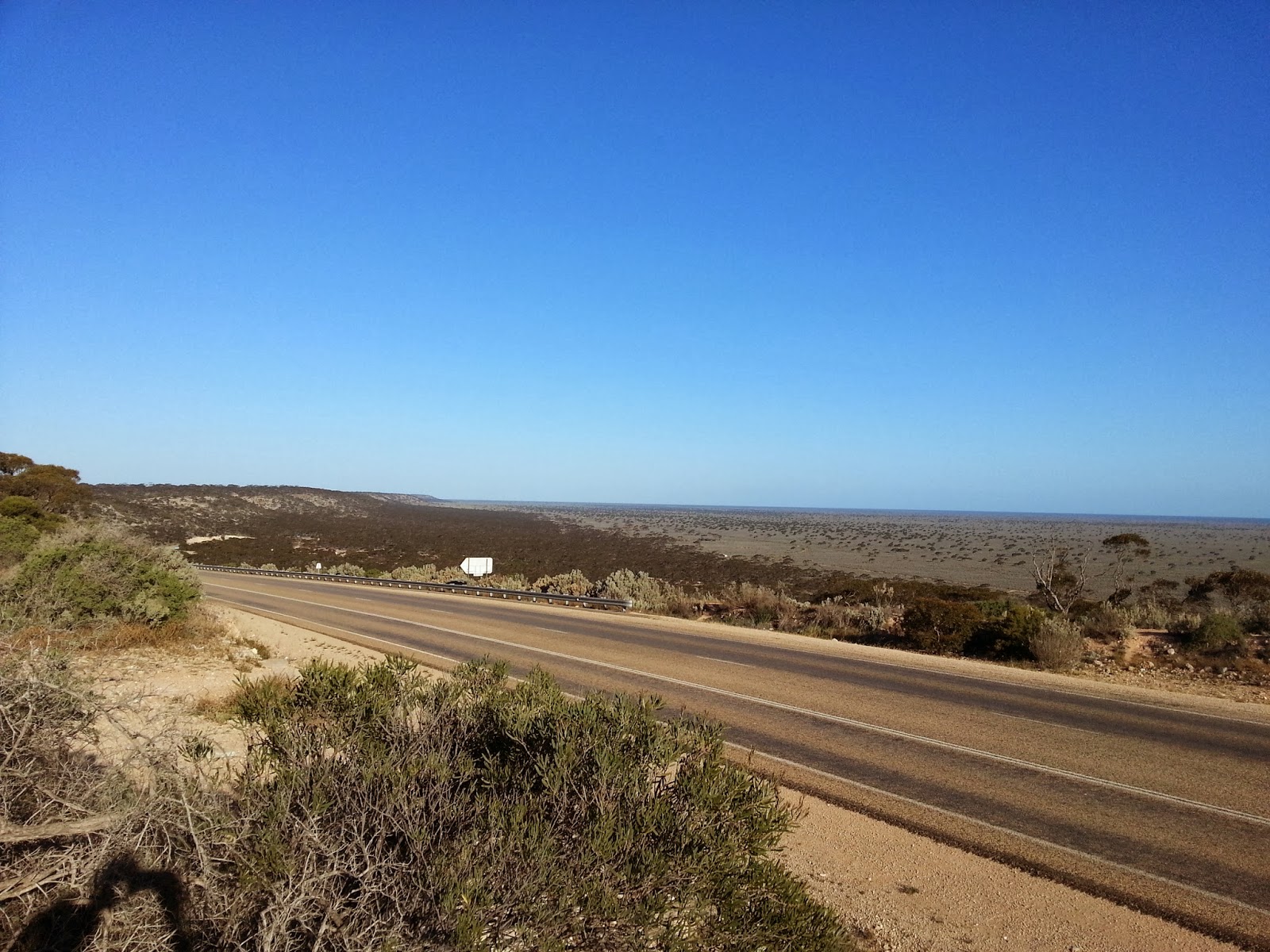 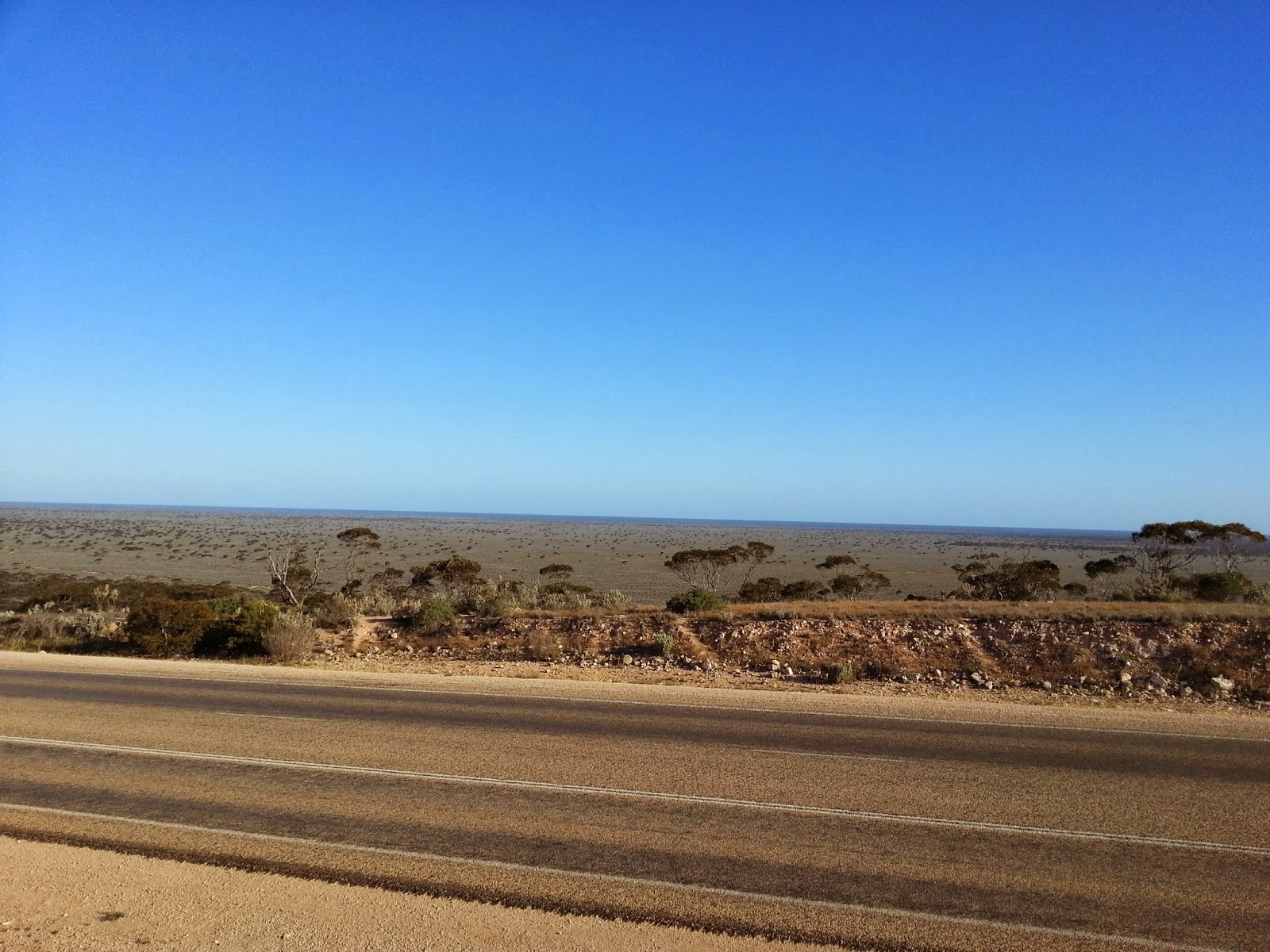 The old Telegraph station at Eucla was an interesting set of ruins. The building is slowly being overrun by sand dunes and will disappear all together if they don't actively try to save it. You've got to believe that the dunes were nowhere near the station when they decided to build there. 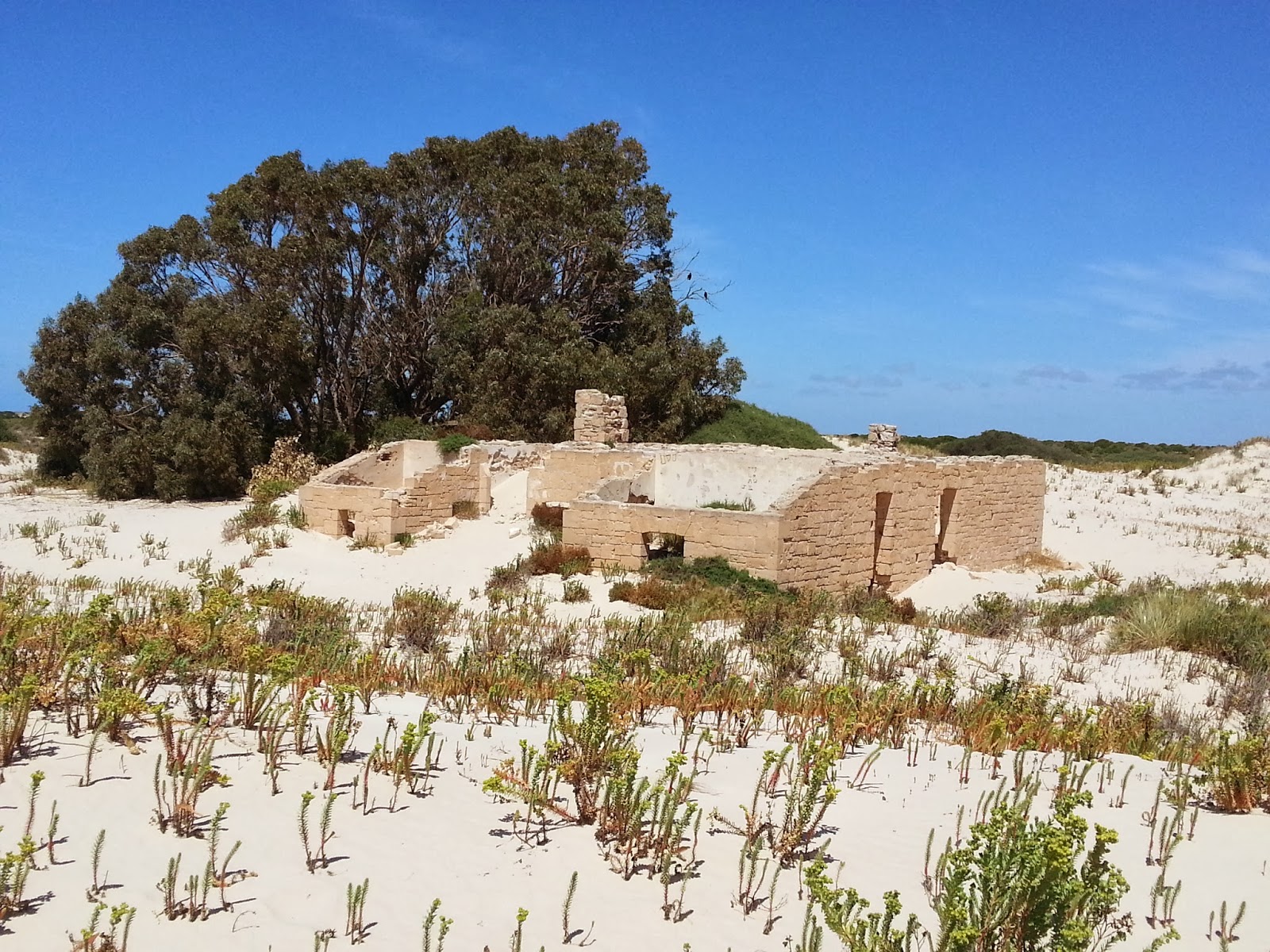 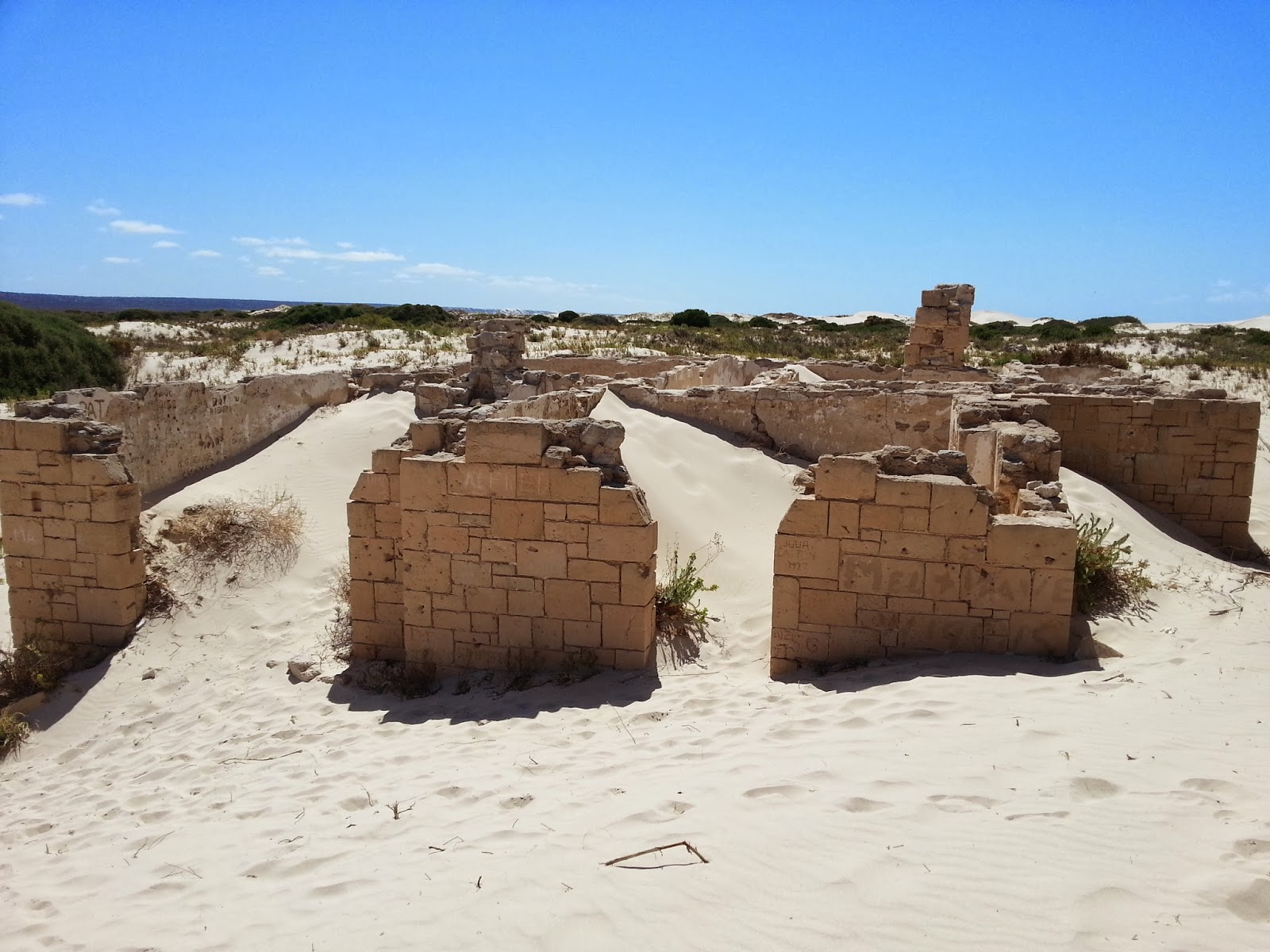 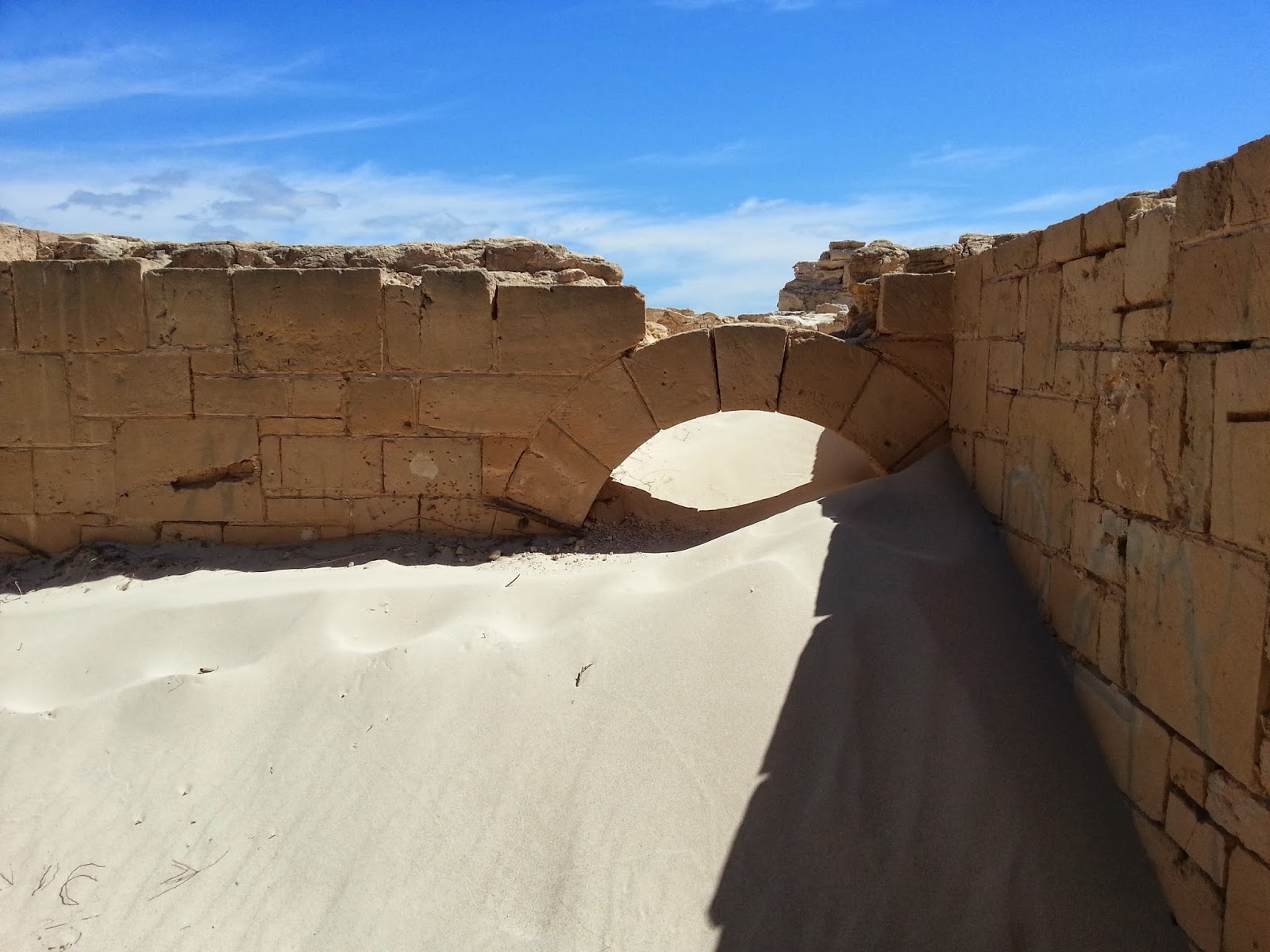 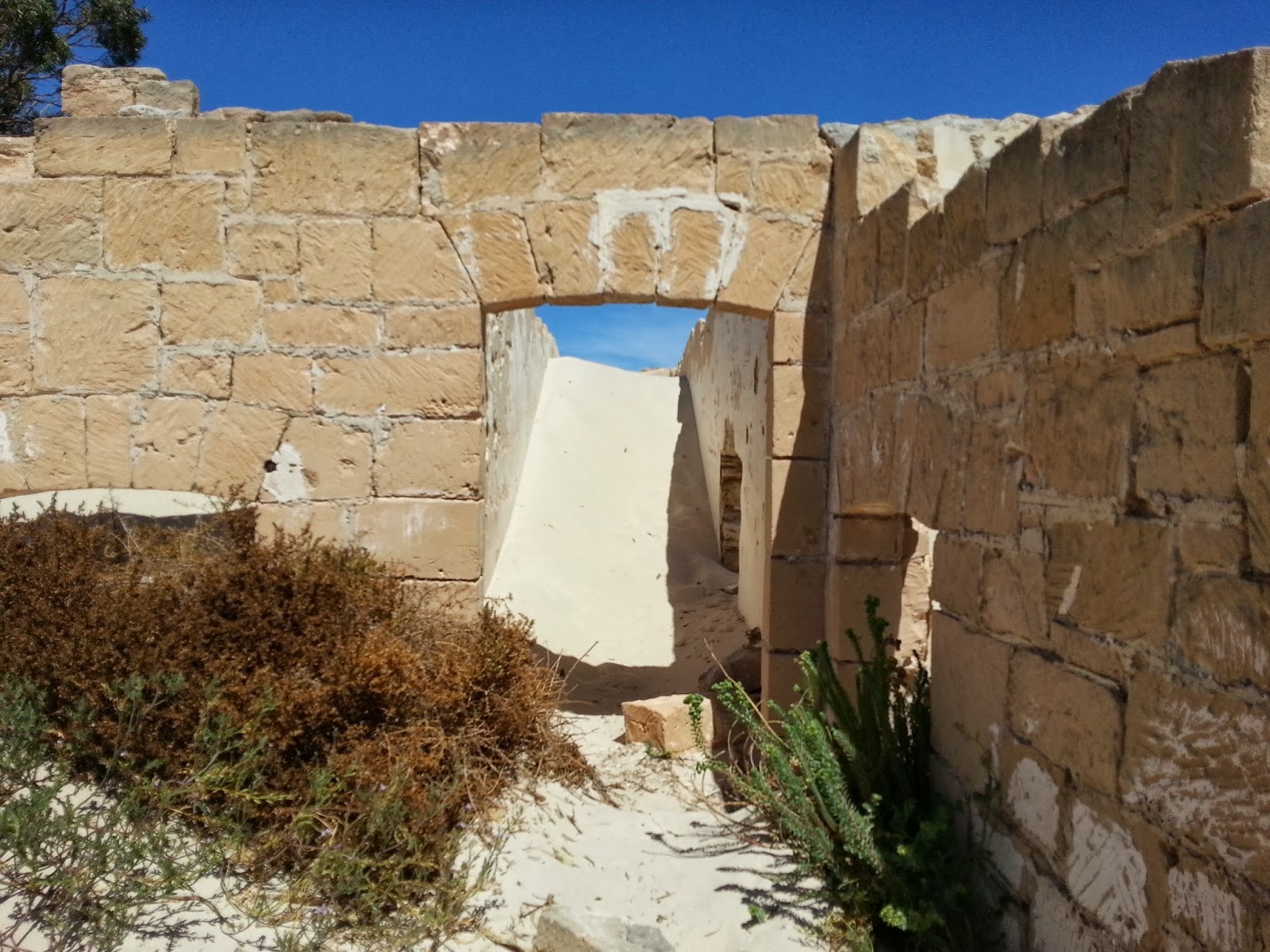 The last interesting bit was at Head of Bight. This particular tourist trap has been set up on the cliff tops of the Great Australian Bight at a spot where many whales spend up to three months of the year calving, resting and playing, close in to shore. Of course with our immaculate timing we missed the season by a month. Typical... Still worth the $7 entry fee just for the views. Definitely the highlight of the crossing. 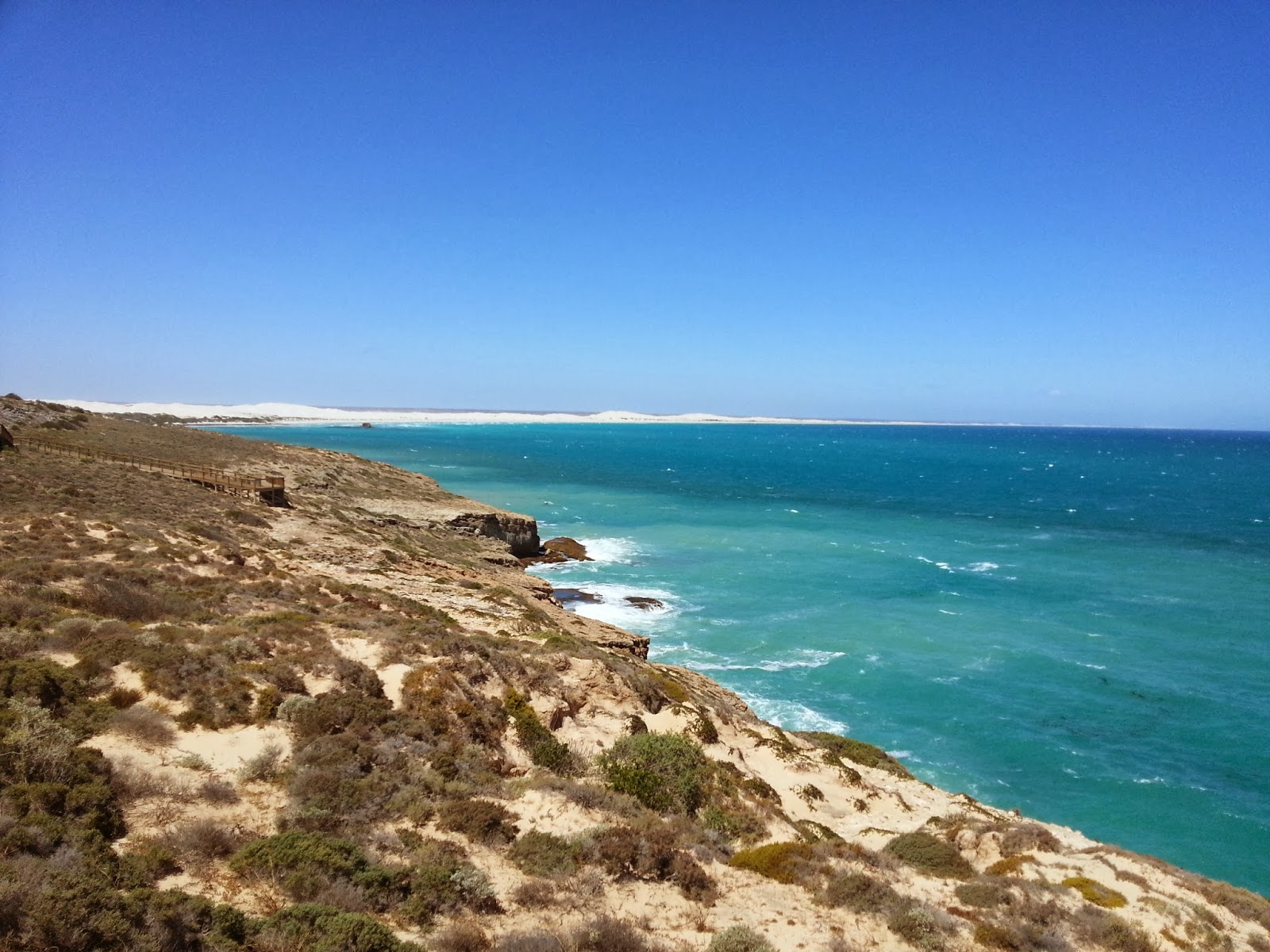 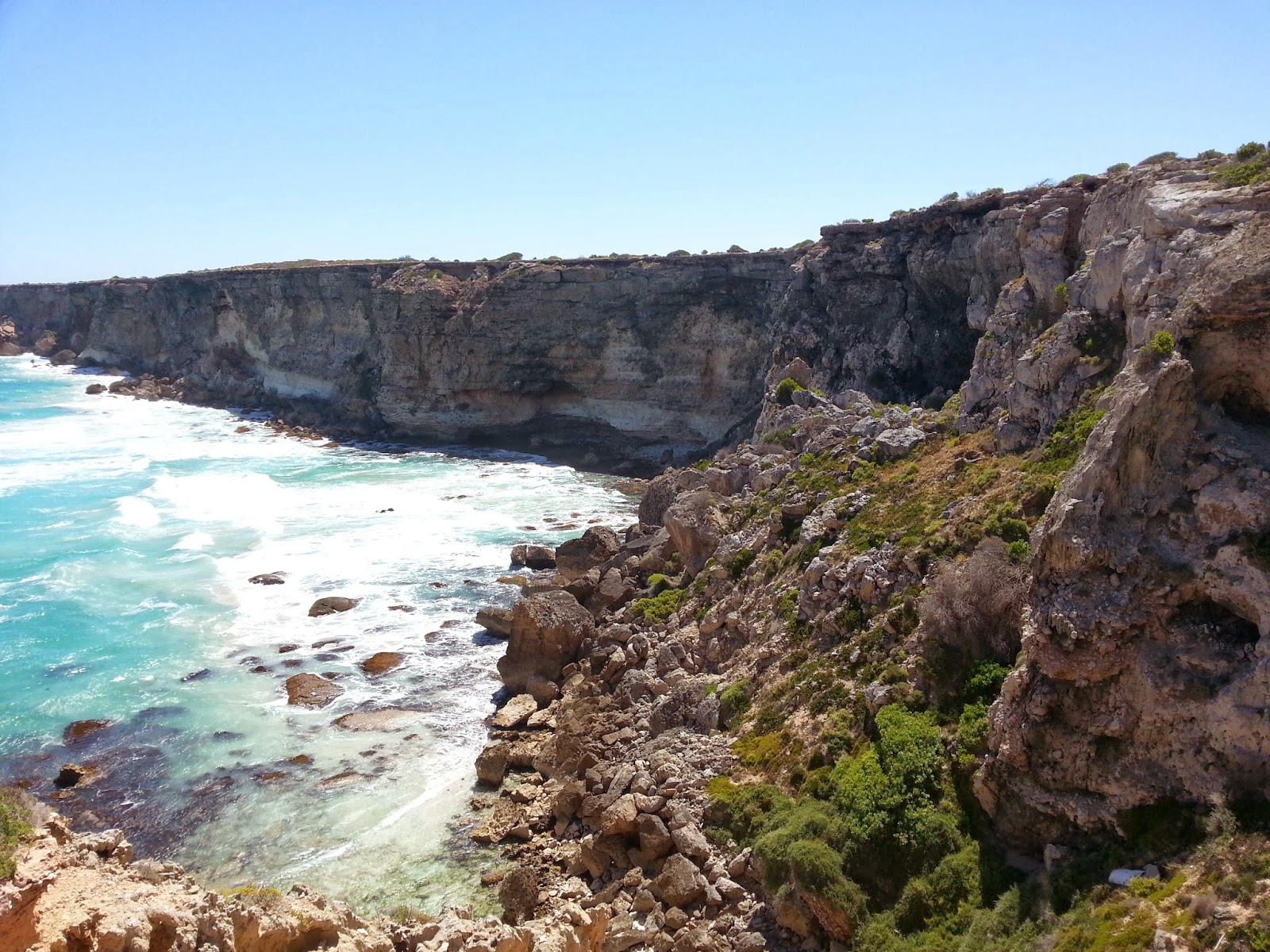 The target for the night was Ceduna, but that proved a bit too far and we spent the night in the very swanky (not) caravan park/motel at Nundroo. If you've never heard of the place, don't worry. I plan to forget it as soon as possible myself.
Somewhere along the way to Nundroo we passed a big brown sign: 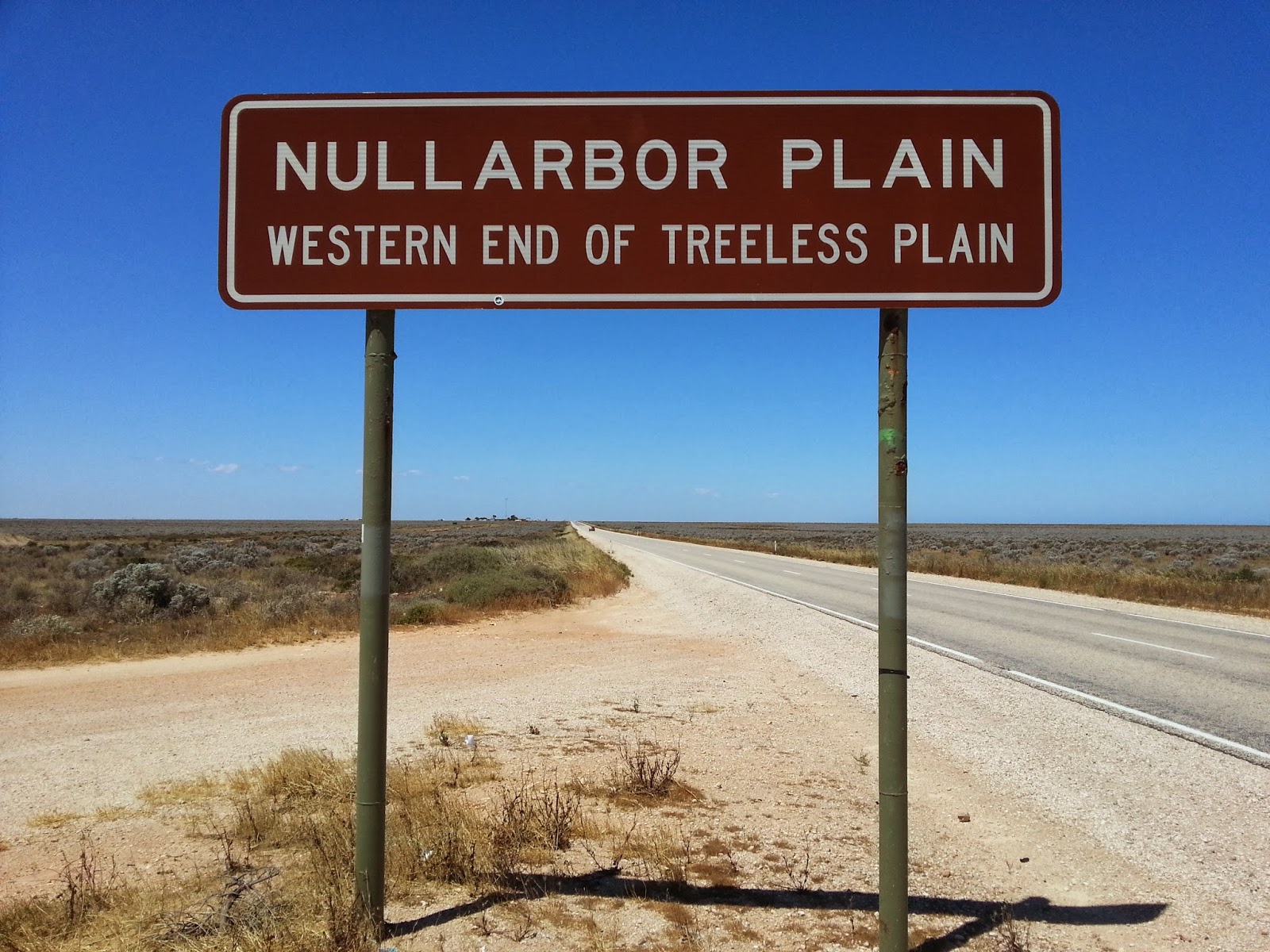 Now we thought we had been crossing the Nullarbor since we left Norseman - as I said, it's all a big tourism con. Not far down the highway there is another big brown sign facing east which had the word Nullarbor on it, and I'm pretty sure it was marking the Eastern end of the plain (couldn't read it all in the mirror as we sailed past, and frankly, couldn't be bothered to stop and check). A couple in the bar of the Nundroo motel (well there is nowhere else to go!) had caught the train across from Adelaide to Perth, and were driving back. They said that the landscape is very barren around the train line which is further north than the highway. So it appears that if you want to really experience the Nullarbor, the only way is by train.

After all the excitement of our plain crossing journey, we finally reached civilization in the form of Ceduna. Nothing spectacular here, but a very nice change after the last few days. Our timing is spot on as usual - the local Oyster Festival finished last week........ In case you are wondering, the biggest oyster this year weighed in at 585 grams. That's one big mollusc!
Posted by Lenzelj at 14:20